As a project manager, you want to share a link with a client for quick feedback, and too often it‘s not as easy as it should be. Here’s the problem: you pass on a test link, and you throw in a caveat with very specific instructions: only test this feature and don’t touch anything else because there may be unfinished and unstable code in there.

Thus, a simple and straightforward review request to the client can result in raised eyebrows and concern about the quality of your programming team. 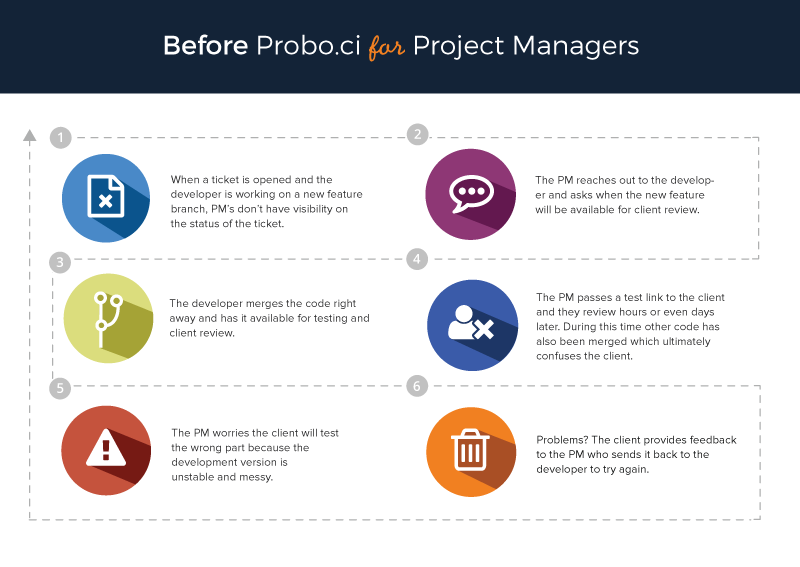 PMs have all experienced unpredictable situations that should be more gracefully handled from a project management standpoint. With the introduction of Probo.CI, a straightforward process regains the simplicity it should have while providing PMs with higher visibility of the status of a new feature in development. At the same time, you eliminate the risk of unfinished or bad code merges that cause conflict.

Companies that utilize a pull request workflow method for submitting contributions toward open-source software development projects know that the process facilitates code reviews, resulting in higher quality code and an opportunity to share knowledge with your team.

The pull request workflow method has been widely adopted and is the preferred way of submitting contributions to a project using a distributedversion control system (DVCS) such as Git in conjunction with GitHub, the popular source code repository hosting service.

While this level of visibility within the pull request workflow has been advantageous, the introduction of Probo.CI  streamlines tests and merges of new features, resulting in a higher level of visibility, improved quality assurance, and increased efficiencies.

When a developer updates a feature, Probo creates a new environment and generates a unique test URL. The PM can share the test URL with the client or stakeholder to visually demonstrate the completed feature so that there is no misunderstanding about the requirements while in development.

Probo.CI also benefits Business Unit Acceptance Testing (UAT) users who no longer have to wait until the end of development when a dedicated UAT environment is created.

Traditional CI Limitations For The PM

CI does make it dramatically easier to detect bugs without having to backtrack, allowing development teams to spend more time on building new features. When a developer completes a new feature, code review is usually performed by a senior developer. Once the senior developer is satisfied that changes are worthy of consideration, a pull request is raised.

With Probo.CI, a new environment is created when the pull request is created, but before the code is merged. A test URL allows the PM to check the status at any time. The lead developer does not have to spend additional time reviewing the new feature, resulting in more efficient utilization of your team.

The PM then passes on the status update and informs the client that the new feature has been tested and is awaiting their review. Ideally, as soon as the client receives the update they should test and verify right away, but we know from experience that this is often not the case.

By the time the client actually sees the update, chances are that other features have been committed to the environment which can create instability and confusion, leaving the client’s expectations unmet and causing them to feel skeptical about the quality of the work.

Let's now observe the same workflow with the Probo.CI Continuous Integration tool. The developer creates a new pull request and works on the new feature. At this point, Probo creates a new environment when the pull request is created and BEFORE the code is merged. A test URL is created, and now the PM can check the status at any time. This gives the PM the increased visibility he/she needs to track status.

The environment remains clean and potential code conflict is avoided. The result is a significant improvement in quality and efficiency.

With improved efficiency, PMs can maximize the time of their teams and can bypass additional time the lead developer spends reviewing the new feature.

The lead developer, who is usually at the senior level, does not have to go through the onerous process of restoring the database, reverting the feature, running the database update, and discovering that the new feature on this ticket and on another ticket whereas causing errors. This can be a 20-minute process or more for a big website.

You may have 8-10 developers with a couple of pull requests each per day multiplied by 20 minutes for each pull request review. That all adds up to a full-time job testing everything, resulting in inefficient allocation of your team.

Probo.CI makes it easy to preview and test new feature updates. Developers can create pull requests, and the PM can review the feature update with a test URL at any time.

Probo.CI integrates with Github to build your pull requests and post the status of your builds back to the Github PR, just like Travis.CI. Probo.CI takes it to the next level, by maintaining a URL for your environment. The PM can easily evaluate the new feature and share the same URL with clients/stakeholders.

Significantly improve quality and efficiency. Simplify the feedback and Business UAT process and without worrying about code commits that contain bugs or unfinished work.